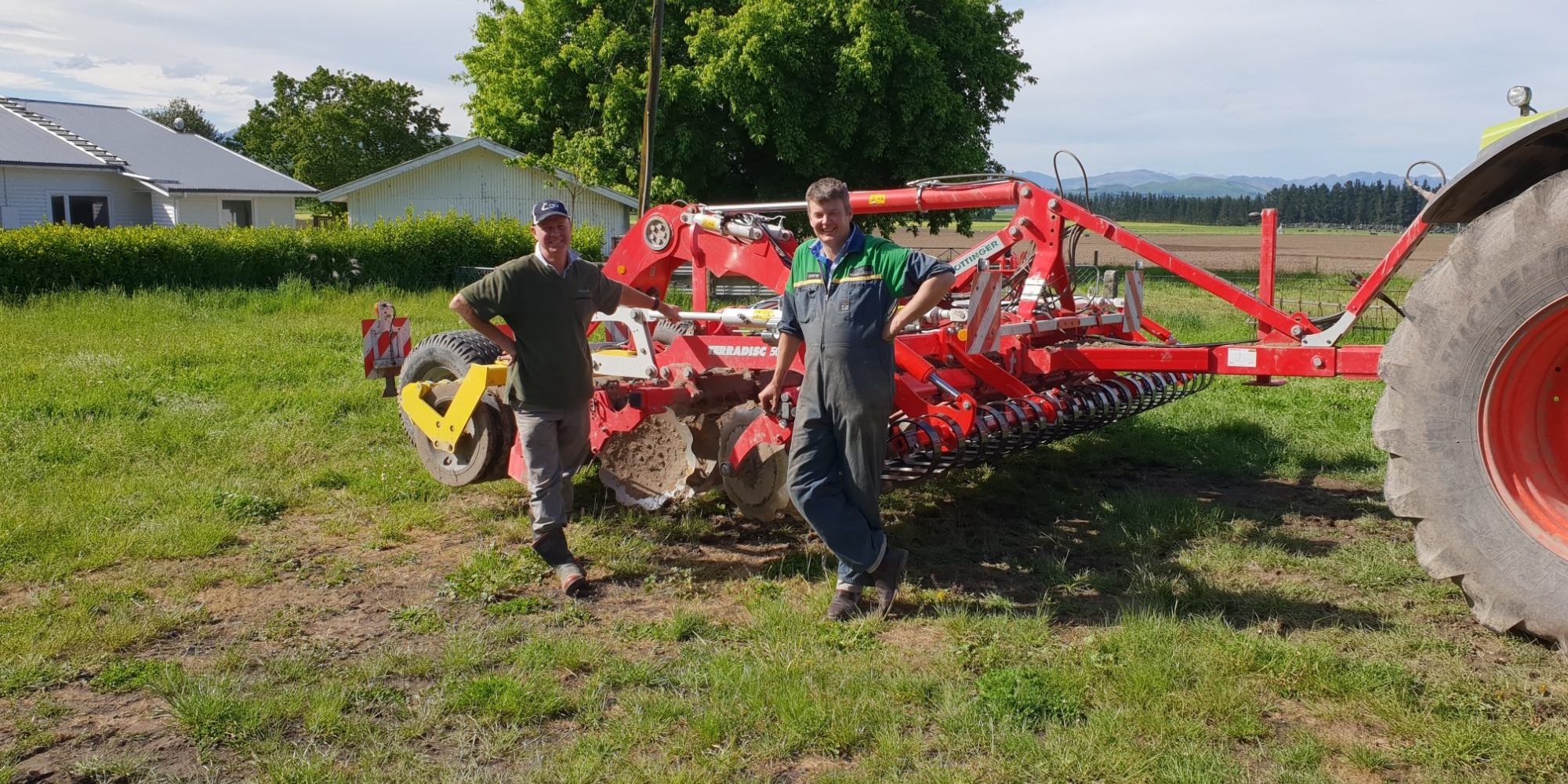 Duncan and Nicky Anderson milk 1650 cows on Auchenbrae Farm in Rotherham, North Canterbury. On their run-off block, they have another 900 yearlings.

That is a lot of mouths to feed, especially as Duncan and Nicky grow all their own winter feed. This includes 100ha of fodder beet, swedes, kale, rape and oats. They also renovate pastures and re-grass.

Their main cultivator for all of this is a Pottinger Terradisc 5001T disc harrow (the “t” stands for trailed).

The Terradisc is designed to incorporate stubble and prepare a seedbed, and its many abilities give Duncan options.

Sometimes he uses it as a primary cultivator to go into sprayed-out pasture to prepare seedbeds for fodder beet. At other times he ploughs first and then uses the Terradisc for the seedbed. Or it can clean up after strip grazing a crop.

“We use it for everything, if we are taking out old turfy pasture with cocksfoot, then we are better off tipping it over and ploughing. But 40 percent of the time we use the Pottinger Terradisc as our primary discs and go straight into sprayed-out pasture”

There are several features in the disc harrow which appeal to Duncan, starting with its 5m working width, which allows him to cover the ground efficiently.

“It is three-quarters of a tonne heavier than our previous disc harrow and it has bigger discs, so it’s a robust machine”.

The large 580mm discs are also why it can be a primary cultivator. The 40 scalloped blades are arranged in two rows and set at an angle.

The discs are spaced at 125mm with 900mm between the first and second row.

The rows are angled in different directions for perfect mixing, whilst being wide enough to prevent stones catching. The carrier arms have two discs per arm which are also angled and spaced apart to prevent blockages. If the discs hit a rock, they ride up in pairs. There are also rubber components in the hubs to minimize impact.

Levelling boards outside of the discs prevent ridges forming between passes, and there are levelling tines in front of the discs.

Duncan says he uses the levelling tines to break down clods and level the paddock. They can be raised out of the way hydraulically if not needed.

Behind the discs is the roller. Duncan specified his Terradisc with a rubber roller because his soils range from stony to loam, and the rubber copes with the rocks.

Rams on the roller are used to control the working depth. Duncan says it is easy to control the depth. He mostly works at 75-100mm but he can work down to a depth of 120mm.

Duncan tows his Terradisc with 230hp and says that is more than enough. He works at 10-14kph.

“Straight after fodder beet where it’s pugged, I will go in with the Terradisc and do a slow cut, but then the second pass is quicker. I work each paddock on its merits”.

Transferring from the field is simply done by a hydraulic lever in the cab.

The transport wheels on the machine are folded up over the centre of the machine when in work, this transfers extra weight over the discs to help with ground penetration. The same wheels are then lowered back down on the ground to lift the machine and the sides fold up into a vertical position to a 3.0m transport width.

This keeps the Terradisc within a safe road width which is also easy to get through gateways.

Duncan brought his Pottinger Terradisc from Quintin Boyd of Drummond and Etheridge, Christchurch. Quintin came out with the machine and spent time ensuring everyone knew how to operate it and set up the discs for optimum results.

“It is easy to operate. One of our operators is a young woman, who had never used that particular configuration before. I demonstrated, it did two laps with her, and she was fine “Duncan says.

“It is an exemplary machine with a great configuration for our farming practice. We can use it to produce the ideal seedbed”