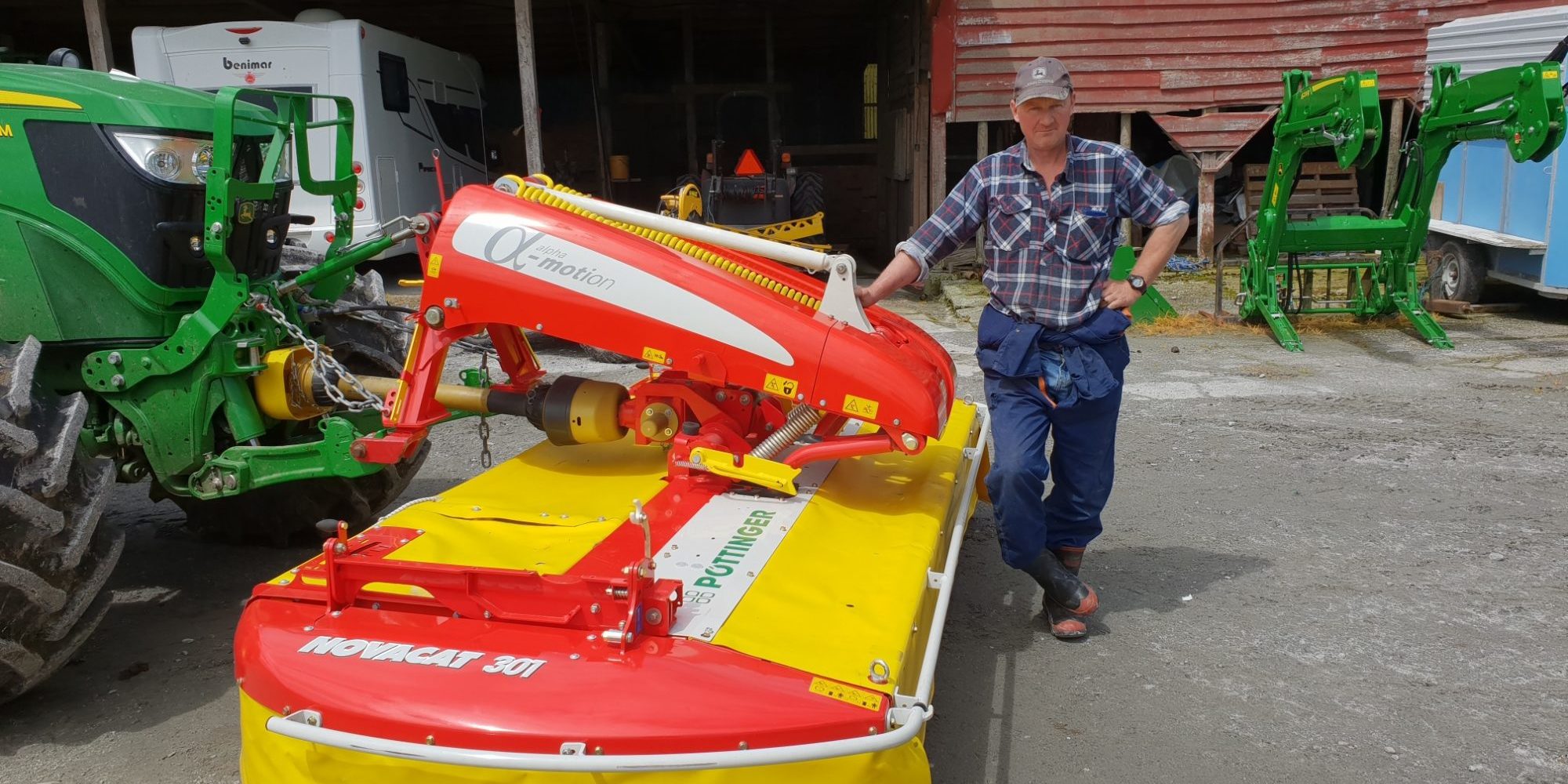 Zane and his wife Tania farm 240 effective hectares at HariHari, on which they milk 500 Jersey-Friesian cross cows. Zane is the fifth generation of his family to farm the property.

In April 2018 Zane did something he had not done before – he brought his first Pottinger mower, a Novadisc 305 rear mower.

“I had never had a Pottinger mower before that” he says. ” I choose it because i heard they are really good mowers and because of the price” he says.

“Its been a really good, i cant fault it. it is bullet proof and it is easy to put on the tractor. it has done a really good job”

Based on the performance of the Novadisc 305, Zane decided to add the Alpha Motion 301 front mower. He took ownership of it in the last week of October and now wishes he had brought one years ago.

“The dealer came down and set it all up and showed me how to use it. it is very easy to operate” he says.

“I love it, its just so quick.  I did 20 acres in two hours yesterday, and because it is still new, I was going a bit slower than I normally would. Previously, it would have taken me six hours to do 20 acres with one tractor and the rear mower”.

Zane found the Novacat Alpha Motion 301 easy to hook up – all he had to do was adjust the top link in the field to get the right cutting angle.

“Then i was away. There was no blockages and it was a very thick crop. The Pottinger mower travels really well. It pushed and pulled at the same time”.

This is the first mower we have had. We got it because we just got a tractor with front linkage, a 125hp John Deere. We chose it because we like the rear mower so much and because we have a good relationship with our local service agent, Drummond and Etheridge in Greymouth”.

The Novacat Alpha Motion 301  front mower has a 3m working width and can mow 3ha/hour.

Zane particularly likes the Alpha Motion suspension and its vertical travel of 500mm. Inclination angles of 12 degrees downwards prevent the cutter-bar from damaging the sward, while the mower can be driven at high speed without the cutter-bar rising.

Alpha Motion technology is based on the advanced design of the mowers mounting frame. Compared to other mounting systems, the guide arms respond better to undulations in the terrain and to the mounting frame itself. As a result, the cutter-bar inclines upwards over bumps and slants downwards into dips.

The rounded, low profile front edge lets the cutter-bar glide smoothly over the ground and separates the crop tidily from the sward. At the same time the rounded conical surfaces of the mower discs lets the crop flow through smoothly and uniformly, maintaining full cutting capacity in all conditions.

“We will have one guy mowing and one on the other tractor with the rake. It will speed things up a hell of a lot. On the Coast here we get a short window with the weather and we have to go for it”.